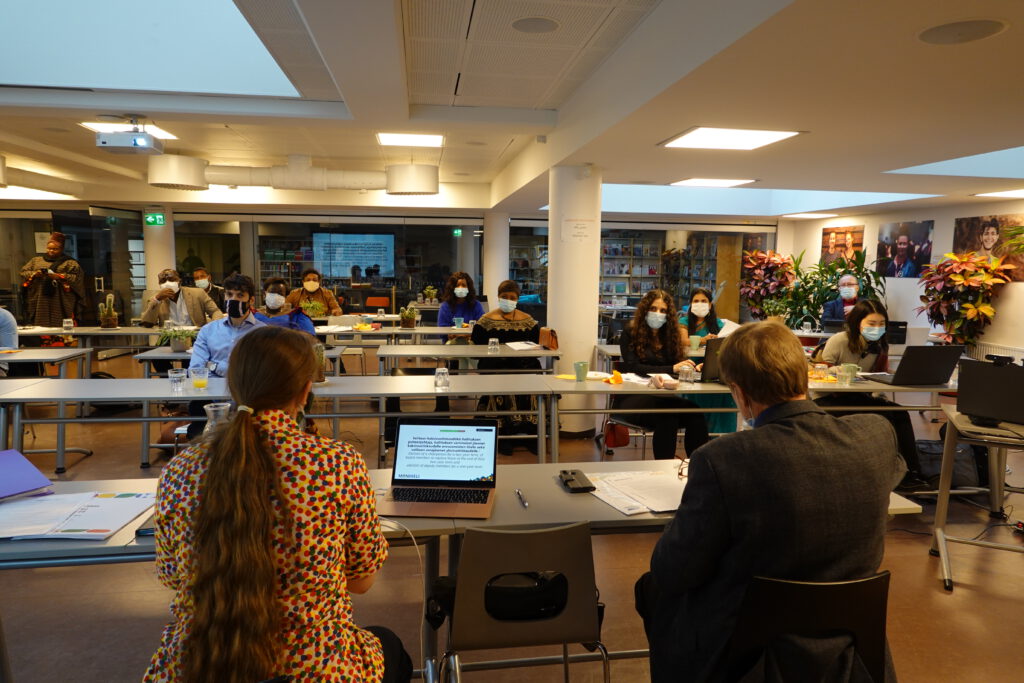 Lauren Stevens, Artëm Kuosti, Nora Luoma
The corona pandemic has had many obvious effects on our lives, but it also highlighted hidden challenges. Many events moved online and people shut themselves away in their homes, relying on electronic means. For us at Moniheli, this highlighted the need for multilingual communication from the authorities, the challenges of mental wellbeing and mental health, as well as the accessibility of online services and people’s digital skills.

In addition to the Covid-19 disease itself, the pandemic has brought forward health issues in many ways, and the importance of health has become more concrete. Remote work and other restrictions have increased mental health problems, particularly amongst migrants. Many people who’ve moved to Finland have also been concerned about their relatives living in their countries of origin, especially if corona hasn't been socially controlled in these countries as well as it has in Finland. Mental and physical health challenges have also affected migrants’ integration and employment.

We have received information and feedback from our network members that information about COVID-19 and vaccines hasn’t been sufficiently available in their own languages. Rumours and suspicion have spread online. We have tried to use our own communication channels to distribute multilingual information when we have found and received it from reliable sources, such as the City of Helsinki.

There have been many challenges in sharing information and targeting messages. There were more cases of infections among the foreign-language population at one point and vaccination uptake has been slower among this group. These challenges have been reported and the authorities have tried to target communication and vaccinations accordingly. This has generated racial hostility and the actions of the authorities and health workers have been perceived by some as ethnic profiling.

Moniheli has also highlighted the need for multilingual and targeted corona communication. The themes of our Terkku project have been broadened in the wake of the pandemic. Lauren Stevens, the Terkku Project Coordinator, and project's intern Sonja Verkasalo have participated in collaborations related to choral communication, such as the Finnish Red Cross’ multichannel and multilingual corona communication coordination (MMKV) project, the City of Helsinki’s and associations’ joint corona group, and the multilingual and multichannel corona communications task force nationwide round table organised by the Ministry of Social Affairs and Health (STM), the Department of Health and Welfare (THL), and the Ministry of Economic Affairs and Employment (TEM), highlighting the challenges and needs we have identified in these forums.

Another key phenomenon that has characterised the era of corona is digitalisation. The development of digitalisation has had both positive and negative consequences.

The digitalisation of organisations took off in leaps and bounds in the spring of 2020, when we rapidly moved to remote work. However, despite the widespread promotion of digitalisation and digital inclusion in society, migrants and their organisations are easily excluded from studies and training. In 2021, our DigiUp project’s Artëm Kuosti and Yuri Kitaba have mapped the needs of multicultural organisations, which have grown due to corona and its subsequent digital leap.

During the corona pandemic, organisations’ basic functions and activities, including client work, moved online, requiring organisations to adapt to the new normal. This has increased the need for diverse and multilingual digital support.

We have contributed to the development of digital rights, services, and networks to better include multicultural organisations as well as linguistic and cultural minorities in digital services. Our networks have been active and interested in cultural and social accessibility. The impact of these exceptional circumstances on linguistic and cultural minorities has been discussed in organisations that develop digital support.

While the corona pandemic is primarily the spread of a single infectious disease, it has had a significant number of other impacts on our own activities, networks, and target audiences. Whilst inequality has increased in many ways, we have also done a lot of work in awareness raising and offering support. We recognise that there is a need for this work to continue.

This topic is associated with